It has been over a year since I last attended Taste of London at Regent’s Park – twice during that weekend, which was really fun especially with the good weather that summer.

Having missed the Summer Edition this year, I thought that it would be nice to see what The Festive Edition would be like – a four day food and drink extravaganza at Tobacco Dock

Our first stop was the Extra Special Festive Lodge where we were welcomed with glasses of fizz and checked out the impressive looking Edible Christmas House. The UK’s first savoury and sweet edible house was created by renowned artist Miss Cakehead and a team of ten over 84 hours, constructed using 1200 mince pies, 30 lobsters, 75kg of parmesan, 30kg of maple smoked salmon, and 300 sprouts, all from Asda.

Asda is committed to reducing food wastage throughout its supply chain and has ensured that the edible Christmas House was made up entirely of test produce provided by suppliers as well as ingredients that were at sell-by date.

And dd I mention that there was also a Prosecco wishing well? – I could do with one of that.

Check out the timelapse video below that they created.

There were some cooking demonstrations going on as well and we managed to sample some of the delicious delights from Asda’s Extra Special range.

We also visited the AEG Taste Theatre where they hosted some of the country’s best chefs, cooking seasonal recipes on their latest appliances. We managed to catch two of the sessions that evening: Steve Groves from Roux at Parliament Square, who made a delicious souffle with banana and peanut butter ice cream, and Tom Kerridge from The Hand and Flowers. 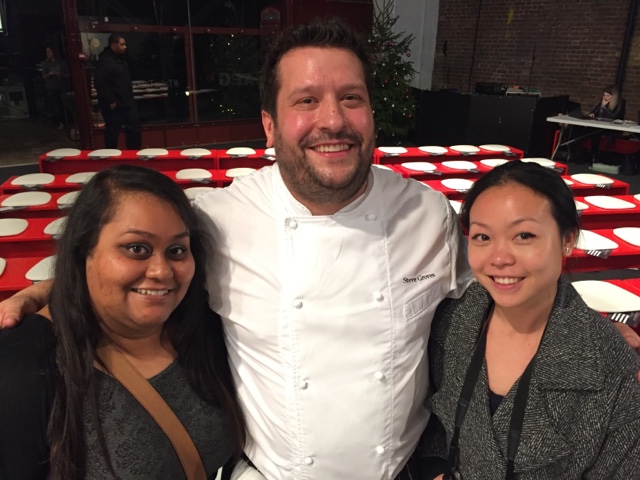 And of course we pin-pointed some of the dishes that we wanted to try from the different restaurants. We had the Truffled Potato Croquettes from Terdwell’s and Truffled Macaroni Cheese from Tom’s Kitchen – both smelled and tasted really good, which helped to warm us up. We also visited the Club Gascon stand where Chef Pascal Aussignac served us the Cappuccino of Chestnut and Truffle Chantilly (MORE Truffle…) and Black Forest Macaroon.

We both tried a 5 Star Kebab from the Action Against Hunger stand: Sheepa had the vegetarian version by Francesco Mazzei, whilst I had the crispy duck kebab by Dan Doherty.

Realizing that the day was coming to a close, we made a beeline for The Dessert Bar where we had been eyeing the tantalizing display of eclairs from Maitre Choux. The display case was almost empty by the time we went back (!), but thankfully we managed to grab the last of their Festive Eclairs (Coconut Snow and Hazelnut and Milk Chocolate), as well as a coffee and raspberry one. A sweet way to end our evening.

Four hours sure flew by really quickly, and there were plenty of activities going on throughout the evening. And I splurged my last few Crowns on Joe & Sephs popcorn, because you can never have too much popcorn.
I didn’t manage to make a second visit during the weekend, but I look forward to checking out the summer edition again next year.